Wow. Wow Oh Wow. Some bike rides are done to train for bigger rides. They are rides that you go on knowing you are working towards something larger. Some rides are just for fun. You go out knowing you have no agenda, you ride for the joy of cycling and seeing what is over the next hill. You might also get together for a fun ride because you want to spend time with some great people. Some rides are for charity. You come together with some other cyclists and raise some money for a good cause. These are all great reasons to ride, but for an epic ride you need more than just one reason. Amazing locations, great people, great causes all blend together for the truly epic, the Wow Oh Wow of rides.

The first weekend in May is the TD 5 Boro Bike Tour of New York. The ride is 40 plus miles through all five Boros of New York City. It starts off in Manhattan, heads through Central Park, into Brooklyn, The Bronx, Queens, and finally over the Verrazano Narrows Bridge into Staten Island. What better location, complete with the bucket list item of a climb over what was once the largest suspension bridge in the world? The tour is organized by Bike New York as their largest fund raiser of the year supporting bicycle education and outreach programs throughout the year. These include adult and child learn to ride programs as well as other educational sessions including how to buy your first bike. Getting more people on bicycles and riding is certainly one of the easiest causes cyclists can support. More butts on bikes is a great benefit for all cyclists.

Patty and I at the start!

I had the great people piece of an epic ride covered as well. This year I rode with Team Some Nerve, a collection of new and veteran cyclists all riding to support Patty Chang Anker, author of Some Nerve: Lessons Learned While Becoming Brave. Patty is a mom who went from cautious and staid to amazing and a force of nature. She set out to conquer her fears, not by merely beating a fear of open water or heights, but by turning each fear into an amazing adventure. Fear of heights fell to a high ropes adventure and the fear of moving water fell to boogie boarding. Fear of cycling in the city? Why not a group ride with 32000 other cyclists through all five Boros? Along the way Patty recruited people from her cycling classes, her publicist, audio book rep, and a bunch of other well-meaning people who felt called to support someone facing fears is such an epic manner.

Team Some Nerve at the start, we are the ones in bright yellow!

Patty’s group was eclectic and that only added to the fun. We had an amazing man from New Jersey out to conquer the Tour on a recumbent bike he just bought. We had a fearless woman on a single speed determined to prove it could be done. We had a cancer survivor that showed us courage on a whole new level. We also had people willing to try something new, jumping onto bikes to go 40 miles when their personal longest rides were only 15 miles long. Into this group I brought Brian, the writer behind I Wear Spandex. It was a great excuse for us to meet up and tackle the tour.

The TD 5 Boro Tour actually starts the day before at the Bike Expo New York where all the riders pick up their tour packet and check out a great bunch of sponsors and vendors. Specialized, Bike New York, and a ton of other vendors were there to cover you if you forgot any gear as well as showcase new products. Patty even did an author signing as well as participate in a panel focusing as women cycling. I met Brian and we walked the floor checking for deals. I was able to pick up CO2 cartridges from REI as well as a great floor pump from a local vendor exhibiting.

The next morning I found my way to the preferred start corral and met up with most of the Some Nerve team. Unfortunately I was never able to hook up with Brian. I was upset that he would travel so far to be there and I wasn’t able to find him. Such was the scale of 32000 riders and cell phones that were running out of battery. I did meet many of my fellow Team Some Nerve riders and I couldn’t believe how inspirational their stories were. Some were there trying the Tour because Patty drew them in with her powerful optimism. Others were there to beat their fear of group rides or cycling 40 miles. Other riders were there to support the rest. One rider, Natasha, ended up riding the entire tour with me. A New York City resident, she trained by riding in Central Park and using her bike to commute when possible. Natasha made my day, becoming the best possible companion through the city, filling me in on where we were riding and the history of the neighborhoods. The year before my friend and I had no idea where we were riding, this year I had an expert telling me all about each Boro and bridge. Natasha couldn’t have been more gracious and welcoming. She completely made the ride for me.

Some of the views didn’t hurt either. There is something amazing about riding in New York City. There are protected cycle lanes and most of the drivers are very aware of riders compared to Connecticut where the infrastructure is lacking. I thought I would be more intimidated than I was on my way to and from the Tour, but what makes this ride so special is that every road you ride on is completely closed to traffic. Unless you run the New York Marathon, this is the only way to travel traffic free streets in New York City. You get to ride on Broadway, through Central Park, through all five boros, and over five iconic bridges. You even ride on Highway 278 up to the Verrazano Bridge. How many other times will you ever get the chance to ride on an interstate highway? Some of the views are breathtaking and there always seemed to be a new view of the city skyline. Each rest area seemed to showcase another part of the city and there were entertainment stops along the way where bands played as riders stopped for water. 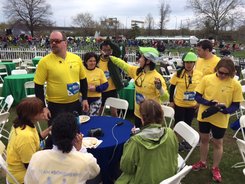 At mile 40 there was a finish festival on Staten Island. Thanks to being part of Team Some Nerve there was a VIP lunch and a chance for a picture or two with Patty who not only conquered her fear but finished in a very respectable time. Natasha and I continued on to the actual end of the Tour, back in Battery Park in Manhattan, by way of an unforgettable ride in the car coral of the Staten Island Ferry. It was a whole new way to ride the ferry, with hundreds of cyclists where cars would normally ride. The ferry crew left the doors open so we could see the Manhattan sky line as we traveled.

Some of Team Some Nerve at the finish festival.

My only possible reaction to it all? Wow. Wow, oh Wow! 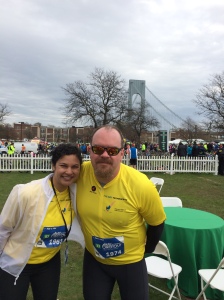 Natasha and I at the Finish Fest

Many thanks are due to Patty who invited Brian and myself to ride with her team. Patty and I along with some of the other riders have already begun kicking around ideas to keep the spirit of the team alive next year. We want to get many more people to stretch their goals and ride with us, perhaps in a program where some of the less experienced riders would get some mentorship from the team veterans. What does everyone think? Anyone want to ride next year?