Last Sunday I tackled my most ambitious ride of the season, the 50 kilometer Cycle Martha’s Vineyard ride.  There were two versions, the 50 and the 100 kilometer.  The 50K came in at just over thirty miles.  The route was well laid out and should have been fairly easy.  I say should because the weather played a bit of a role in the level of difficulty.  The ride was especially nice because my father in law rode with me and Katie and my father took the trip with us.  I am a little short of photos for this post, but there is a gallery on my Facebook page of some of the scenery.

We began the day at 4:30, leaving Manchester, Connecticut on our way to Woods Hole, 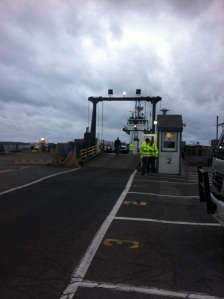 Massachusetts.  It was cold, dark, and rainy.  Perfect travel and cycling weather.  Fortunately, the weather was scheduled to improve.  We arrived at Woods Hole in time to take an earlier ferry to Martha’s Vineyard.  For those who haven’t been to the island, there are a few different ferries.  Most are large boats where you drive inside and then go upstairs to various seating areas, including outside if the weather is nice.  There is a snack bar, tvs, and WiFi.  We didn’t get one of those boats.  We got a little ferry that had enough room for a couple of rows of cars on each side of the central tower where the boat’s crew rode.  Did I mention the cold, the rain, and the wind?  It was a choppy ride over.  Everyone but me stayed in the car.  I was too excited and had to watch us leave the docks and make our way across the bay.

Once we got across we headed to the start point to check in.  The organizers were very 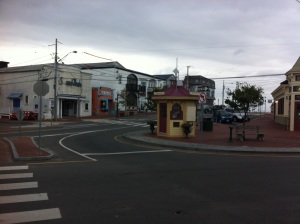 friendly and even gave us a few suggestions where we could eat breakfast before the ride started.  We ended up at a great little breakfast spot named Biscuits.  We also found out that the tourist season was over.  It was the last day that they would be open until the spring.  That would actually become the theme of the day.  All of the year round residents of the island were closing up and getting ready for their long winter break before working like mad through another tourist season.  Everyone was happy that the end was here.  All of the gift shops were selling whatever was left as cheap as possible to get rid of their stock.  Not much was left, but if you could find something you wanted, it was yours.  About half of the stores never even opened.

These conditions helped make the ride amazing.  The lack of traffic along the route allowed the riders to focus on the ride and the scenery.  The rain finally stopped just before we left for our ride.  The people riding the 100K route had a little rain, but we escaped it.  The wind was a completely different matter.  I can honestly say that I never thought about what riding against 35 mile per hour gusts would be like, and I would be okay to not to that again.  There were points that we were leaning sideways into the wind to not be blown over.  There weren’t too many times we had to fight it, but there were points that it became silly.  At one point we were riding into the wind along the water and I could feel my legs burning with the effort.  I looked down and saw that I was only going six miles an hour!  I tried to call back to my father in law, but he couldn’t hear me.  Later the woman in front of me said that she was glad I said something about struggling because she felt better knowing it wasn’t just her!

That story also brings up one of the best parts of group rides.  Starting a ride with fifty or sixty other riders and knowing there are almost one hundred on the other ride is a great feeling if you normally ride alone or with one other person.  Getting to share your story and hear others share theirs at rest stops makes the ride more engaging and enjoyable.  It is a great feeling to know that you are a part of something that the island knew about and was talking about was great.  People at breakfast knew about the ride, and were commenting on all of the riders they had seen around the town.  This ride was had all of the “Event” status that the Tour of Hartford needs to recapture.

The rest stops were as much of an event as the ride itself.  The first rest stop was at

Morning Glory Farm.  They had just had their annual Pumpkin Festival and there were hundreds of pumpkins decorating the stop.  The food was all fresh baked cookies and breads.  Everything smelled warm and delicious, which was twice as temping after the first 15 miles of the ride.  The volunteers were friendly and inviting and everyone left with a smile.  This was also where the 100 and 50K rides came together, so we were able to talk to the people that had tackled the harder ride.  This was past their half-way point.  They inspired me to go for the 100K next year!  The second stop was at a local bike shop.  It was closer to the normal charity ride rest stop in that it was a simple table with some snacks and water, but again, the volunteers went above and beyond in helping riders get whatever they needed.  If the entire ride had a hallmark, it would be the friendliness of the organizers and volunteers.  They really did everything they could to make our little band from Connecticut feel welcome.

The end of the ride was a party, complete with a full bar, pig roast, and live band.  We stayed for a plate of food and the headed out to the ferry.  We were hoping to get out early, but due to one of the ferries breaking down we couldn’t get an earlier one off the island.  We ended up exploring a little more and finding a place to eat dinner.  Finally we caught our sic o’clock ferry back to the mainland.  We also caught an amazing sunset.  We had one of the large ferries, but I still rode outside most of the way back.  The sea was still choppy and it felt like a roller coaster ride in the front of the boat.  At one point the spray came over the edge and almost knocked me over!  It was a longer ride home soaking wet, but it was worth it.  We finally made it home at 9:30 at night.  It was a long seventeen hour day, but it was a great adventure.  I can’t wait to do it again next year, but I think we will be staying in a hotel to avoid trying to do it all in one day. That 100K ride leaves earlier in the morning too….

This entry was posted in Uncategorized. Bookmark the permalink.